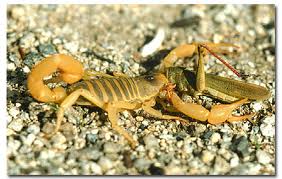 Scorpions are my nemesis. I hate them with a fiery, fiery passion. I cannot stand them. I just happen to live in the part of the world where seeing them in your bathroom, kitchen, dirty clothed hamper etc…is no big deal. But I have had enough I tell you. I have been waging war on these disgusting and poisonous creatures for many years now. I have had many great victories and many devastating losses. For awhile it seemed as if they had retreated but they have since mounted a surprise attack. I will let you in on my battle plans so if you too are under attack I may be of some service to you.

First and foremost, the best way to kill a scorpion is with a shoe. It seems so simple but believe me it gets the job done and if you hadn’t thought of doing this before then you are just a damn idiot, plain and simple. You see a scorpion, get a shoe and keep smacking it until it is dead. It has to be quick and with some force because these little bastards are fast. Keep shoes in places where you tend to have more of a problem just to have them handy. If you don’t have a shoe handy a broom will work but it isn’t as instantaneous. You can always use the shoes that you are wearing but I don’t like doing that, its icky. But if it is all I got I will do it. I will never let one these evil things live, never.

I frequently go scorpion hunting. You can do this inside or outside. The methods are a little different though. If you want to kill the 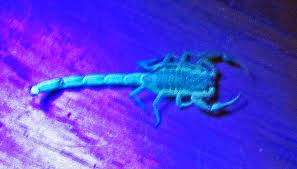 nasty scorpions before they enter your humble abode, you will need a blacklight and a shoe or something to kill them with or some sort of spray (I’ll get to those later so stay tuned). At night take the blacklight and walk around your house and yard looking for them and when you find them, kill them. Its a simple process. Inside your home it is also pretty easy. You can use the same method by turning off all the lights in your house and using the blacklight. Or you can do the same without a blacklight and just scan every room and kill all the ones you find.

Getting stung by a scorpion is never any fun. Believe me, I’ve been stung so many times that I can’t even remember. I used to live in a scorpion infested basement. My parents didn’t like me and banished me to the ‘crypt’ as my friends called it. When I lived in the basement, I would kill at least five a day. I would also capture and torture them, prisoners of war. That is actually when the war started. Anyway, if you are stupid enough to get stung you may want to seek medical attention. It depends though, it effects people differently. I suggest a wait and see method for that. But if it is a child or perhaps an elderly person, I would suggest seeking medical attention immediately.

Another method for killing scorpions is with a homemade torch. This is accomplished with a lighter and some hairspray. I am not responsible if you are a big enough idiot to burn down your house. That is your own fault and I will have no part in it. There are also some good pesticides out there that will help keep the scorpion troops at bay:

Some of these can be sprayed on the scorpions or in the cracks and crevices in your house that they use to invade. I am not above chemical warfare. You can also enlist the help of some animals. Cats and chickens will kill scorpions. These extra troops do make a difference. If you feed and care for them, they will hunt and kill the scorpions for you.

So I ask you, please join me in bringing these bitches down. I can’t do it alone, if we band together we may just win this war.

3 Comments on “How to Kill Scorpions”