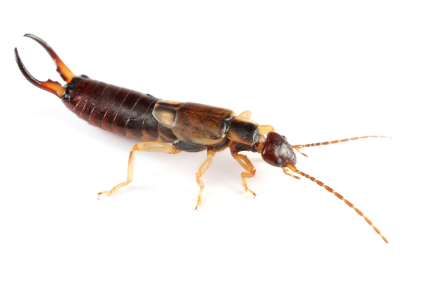 Earwigs have a nasty reputation for crawling into ears and eating brains. Earwigs do have a fondness for dark, damp areas, so maybe one has actually crawled into someone’s ear at some point. Earwigs have big pincers making up nearly a quarter length of their bodies. Hence the “brain eating” rumor. They don’t, however, eat brains and as big as their pincers are they don’t hurt much. As with many common insects, the hardest part about killing earwigs is knowing where to set the poison. 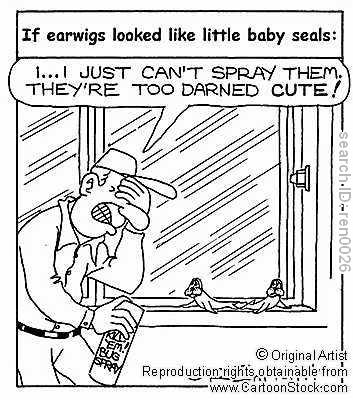 Instead of brains, earwigs’ food of choice is flowers and vegetables in home gardens. They love to crawl and congregate in dark, moist areas both inside and outside of your house.

To find out where the earwigs are congregating make this trap: roll up a damp newspaper with a rubber band and dab it inside with fish or vegetable oil. Earwigs are attracted to the oil and the dark, damp newspaper. Leave the trap out overnight, since earwigs are primarily nocturnal. They’ll crawl in and set up shop.

After you trap the earwigs in the newspaper please don’t use it for compost. Earwigs love compost. Instead, put it in a sealed plastic bag and put it in the trash.

Here are some tips for how to kill earwigs.

Soapy Water
This is an old favorite for homeowners with green thumbs. Depending on the soap used, it’s a relatively non-toxic solution. Mix a tablespoon of dish soap with a gallon of water and spray it on the plants’ leaves. You can also safely water your plants with it. The soap will kill the earwigs, though.

Boric Acid
Boric acid is a common insecticide, but unless it’s ingested it’s pretty safe for humans and animals. So just make sure not to eat it, and sprinkle boric acid powder on the soil where you suspect earwigs live. They have to pass directly through it for it to be effective.

Natural Predators
Let nature do the killing for you! Set up bird feeders to attract the earwigs’ natural predators. Some gardeners have a problem with birds eating their produce, but there are alternatives. If you have a pond in your yard, consider getting some frogs or toads. It’s always better to get someone else to do the work for you, anyway.

Sodium Light
Tragically, you may be inviting the earwigs into your house if you use fluorescent lights. They’re attracted to the wavelength, and the lights illuminate cracks earwigs can use to get in. Okay, sodium lights won’t actually kill earwigs, but they’ll help keep them out. You should also seal cracks around your foundation and ensure windows and doors close tightly.

And of course, if you want to kill earwigs you can always pick up an earwig-specific insecticide containing pyrethrins, which are not generally dangerous for humans or dogs. Granular insecticides are also available. Using any of the aforementioned methods can make it not only easy, but actually fun to kill earwigs and watch the little creepers die.