For many homeowners who have unsightly holes in their lawns, the first thing that comes to mind is the pesky mole. Those critters dig a network of tunnels that can wreak havoc on your yard or garden. When they tunnel through your yard they kill off the roots and bulbs of many of your plants. The question is; how do you get rid of them?

Now, there are humane ways to eliminate your mole problem by using traps which allow you to capture them alive. However, the most effective way to guarantee they won’t return is to kill them. Here are a few ways to go about doing that so your yard can finally be mole free.

1. First, be sure to check with the Department of Wildlife in your state. Washington is one state that doesn’t allow the use of body-gripping traps for killing moles. You are allowed to trap them. There are also states that won’t allow the use of poison due to concern for the environment.

2. The next thing you should do is locate the tunnels. Look for an area with several molehills. Next, grab a large stick and start poking the ground in the area near the molehills. If the dirt is weak and gives way, then you’ve found the tunnel of that little critter and any friends he may have.

3. Now that you’ve found the tunnel, it’s time to set the deadly trap. There are two popular brands, Victor and Nash, which make traps for choking and for impaling moles. Make sure to follow the instructions carefully when setting up these traps. There’s really nothing to it, you basically place the trap in the tunnel where the mole will find it. 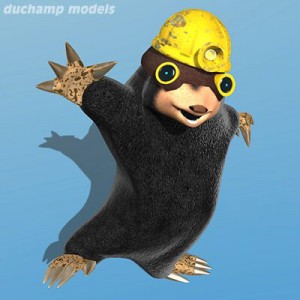 4. Another option is to drown the mole. Many experts who have studied moles say that it’s possible to flood the tunnels by sticking a hose down into the molehill and therefore drowning the moles. This option, though inexpensive, has been known to be ineffective.

5. Many people who deal with these pests have tried poison as an option of disposal. A popular brand is Talparid mole bait. It can actually kill a mole in less than a day. They are attracted to the poison because it looks similar to earthworms. All you have to do is put the poison in the tunnels and follow the directions on the package.

6. If all else fails, you could try gassing the moles. This of course is another form of poisoning them. Now, I’m not talking about the kind of gas you put in your car, you don’t want to accidentally catch your lawn on fire, do you? No, I’m talking about a gas specifically designed for this purpose. One type of gas to use is Giant Destroyer. Many have had great success with this product. A word of caution, make sure there are no pets or children around when you apply the gas. You also may need to apply it more than once to get the job done thoroughly. With any kind of chemical, make sure you read the directions carefully.

Now that I’ve given you some ideas on how to get rid of those pests, I do wish you luck in which ever option you choose to go with. Hopefully, after you get rid of them for good you can start to repair your lawn and you’ll be ready the next time those moles dare show their furry little faces around your yard again.

How to Kill Alligators