Let’s say one sunny, summer afternoon you’re out working in the yard. You’ve got the radio on listening to the ball game as you pull those pesky weeds next to the fence. Suddenly an emergency broadcast interrupts the game.

Not thinking much about it, you continue the yard chores. Suddenly, out of nowhere an elephant appears and the two of you are face to face.

The elephant decides to take his years of frustrations from human captivity out on you. He smacks you with his trunk, knocking you down and staring at your body on the ground.

At this point you know it’s either him or you. So how do you take out a 7,000 pound elephant?

Bore Him to Death
Quickly run to your radio and flip the dial from the ball game to National Public Radio. Who hasn’t been bored to death by an NPR broadcast? Within a few minutes the behemoth should no longer be a threat as the monotone voices put him down for the dirt nap.

Call Bob Parsons
When it comes to killing elephants there is only one true expert. Bob Parsons. He has saved countless villagers from starvation by hunting down these rouge predators in the past and should have no problem bringing down this pansy circus elephant.

Make sure that you have plenty of hungry friends on hand as Mr. Parsons will not allow any of this tasty elephant meat to go to waste. As an added bonus you may even get a free GoDaddy hat out of it.

Death by Peanuts
Everyone seems to be allergic to peanuts these days. How did this happen so quickly?

We all know that elephants love the salty, shelled snack, but in this day and age he’s probably allergic too. Grab that bag from your pocket that you couldn’t eat on your last flight. Toss it over to the big guy as a peace offering, but then relax as he swells up, quits breathing and goes to elephant heaven.

Death by Broken Heart
Some people see say that it’s possible to die from a broken heart. Typically a broken heart arises from some form of major disappointment.

Sure that elephant is extremely excited to be free and out of circus captivity. But once you tell him about TV shows like The Apprentice or American Idol, his vision of freedom will be shattered. Five minutes of Trump’s toupee or Steven Tyler’s talent “judging” should send the mammoth mammal to his grave. 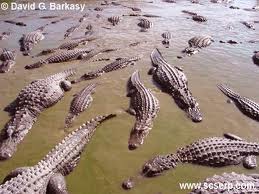 How to Kill Alligators