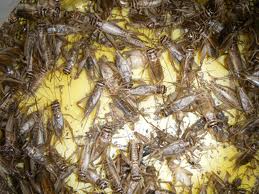 Crickets are pretty much harmless little creatures. You will hardly notice them in small numbers except the noise and in large numbers they will do minimal damage. They can be found outside or inside. I honestly don’t know why you would want to kill them except if the noise is driving you nuts but even then you don’t need to murder the poor little guy. To each their own I guess, you sick, sick person. Well its my job to inform you how to kill crickets so I will do that.

One method to kill crickets that are inside is with diatomaceous earth. You sprinkle it around all the entrances that a cricket can use to get inside your house. What it does is it’ll cut up the cricket and cause it to dehydrate and die. It is harmless to humans and pets but I still wouldn’t recommend inhaling it or something. If you do then you are stupid. Another way to kill crickets is with jars. You will need:

You will then mix 1 part molasses or whatever to one part water in the jar. Place the jars where the crickets like to hangout. The crickets will want to investigate the sweet smell and jump in the jars. They will then drown in the water. Its not a good way to go, getting all excited about a treat and then BAM! Death. Poor little things.

One method to kill crickets that always works is with a shoe. It is fail proof unless you have terrible aim. You see a cricket, you stomp on it, the cricket is dead. It is very simple unless you are severely stupid. If you are not wearing shoes then find one and whack the poor cricket until you kill it. If you are truly a sick person then you can create a torch to torture the cricket. You will need a lighter and some hair spray. When you find a cricket light the lighter then spray the hairspray and you will have a crispy cricket. Some people eat crickets so you might want to try that.

Another way to go is with pesticides. There are a variety of kinds that will kill crickets outside or inside. A few kinds are:

Just spray these around where the crickets like to spend their time outside and inside and you will soon be rid of your cricket problem. For your garden I would recommend mixing soap and water in a spray bottle and spray all the crickets you see. A cricket problem is not a serious one and I would not recommend calling pest control. Personally if I find a cricket inside I capture it and let it go. I don’t like killing things that are not creepy and that can’t harm me. I also don’t kill crickets because I wouldn’t want to accidentally kill anyone’s conscience. You may not know this but crickets are sometimes used by fairies to serve as a conscience for those who may not have one. They may not have been born with one or perhaps they were created by someone and then brought to life by a fairy. So be careful when you kill crickets, you may have a certain blue fairy after you if you do.