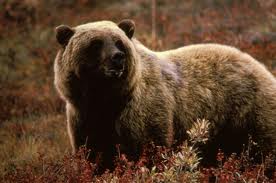 Killing bears is not something that I would recommend doing unless you are a skilled professional. In fact, I am against hunting any animal unless it is to be used as a food source or for your own protection but this is my job so I will give you the information needed to properly kill a bear. Again I do not suggest you just go out to kill a bear for kicks, mostly because you’d probably end up as a meal which you probably deserved for your stupidity.

If you plan on going camping where bears are known to be present you will want to come prepared to defend yourself. A gun is your best weapon for this and you will want a powerful one. If you want to bring a rifle, you won’t want anything less than a .30-.30. A 30-06 will bring almost anything down. A handgun is not recommend but if you do decide on that, a .44 magnum or a .50 caliber is what you’ll want. What is recommended the most is a 12 gauge shotgun loaded with slugs. Anything less than these and you’ll just piss him off. So if you are going to be somewhere where bears like to hangout don’t go out unprepared. And don’t provoke a bear, odds are you will be torn to shreds. You will want to shoot him in the head or in the middle of the chest where the vital organs are placed.

Again, don’t go looking for a bear just because you want to kill him if you are an unexperienced hunter. You will end up dead. Its that

plain and simple. If you do this, you are stupid and will get what’s coming to you. Bears don’t usually attack humans unless they feel threatened or provoked so don’t be an idiot. The best hunters can kill a bear with one shot but that takes skill and if you are reading this then you don’t. They can also kill a bear with a bow and arrow but that is very hard to do.

There are a few other things you should know. There are two bears that are not to be harmed under any circumstances. Do you hear me? These are nice and friendly bears that have never done harm to anyone and there will be a serious penalty from me (a very slow and painful death) if you hurt these bears.

The first one lives in a relatively unknown national park near Yellowstone. He is a bit of a prankster but means no real harm. He lives in Jellystone Park. He is smarter than the average bear and enjoys a nice

picnic every now and then. He can often be seen with a younger bear. If seen in the wild, he will probably play joke on you then ask for some food. See, he isn’t dangerous.

The other bear that is not to be killed or hurt can be found in the jungle. He is often in the company of a boy who he calls a man-cub. He also like to sing and is not that bright. He can also be found flying his plane on occasion. However, the tiger that is usually after him is fair game.