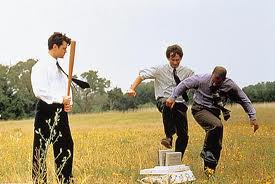 First and foremost, I would like to state that we here at howtokillthings.com do not condone the killing of your boss. No matter how annoying he is, or that he didn’t promote you for like the hundredth time or you didn’t get that raise you were counting on. We are god fearing people here and don’t condone the killing of anything. We just think you should have the information in case you are thinking about killing things. All I’m saying is that if you snap and kill your boss, there is no suing or blaming us because you were stupid enough to do it and get caught.

There are many ways to kill your boss. You can kill him with kindness or kill him in sales or kill his self-esteem or whatever. I will address many ways you can kill your boss. Believe me, I know how it is to have a boss that you wish you could kill. I have had many of those and my current boss is no better either. Seriously, try working for your brother and not want to kill him. It ain’t easy (I’m just kidding, sort of). Maybe your boss is like Michael Scott or David Brent or Bill Lumbergh or Miranda Priestly or whoever, all you know is that they need to go. We are here to help you.

One way to kill your boss is to kill their reputation. No matter where you work whether its on Wall Street or at a McDonald’s, reputation is important for your boss. There are many ways you can kill a reputation. The best way is with a rumor. Make something up like they like to screw goats, they’re cheating, the’re skimming off the top, they’re really a demon or you know anything. You then tell one person, usually the work gossip, that you heard it from

someone else who heard it from someone who saw it. This should make the rumor spread like wild fire. Once it is around and everyone is talking about it, no will know where it started but everyone will believe it is true. Of course what the rumor ends up as will be different then the one you started. Despite the fact that your boss will deny it, no one will ever truly believe him. His reputation is killed.

Another method to kill your boss is to kill him with kindness. So your boss is just an asshole or you were overlooked for something or whatever, you can make him feel guilty by killing him with kindness. You have to seem to be genuine though, that is key. If you don’t then he will just continue being the same. He say’s something rude, just smile and compliment his tie or if your boss is a girl then her hair. Never seem to let anything get you down. You are resilient to the bone. Do everything before you’re asked, go that extra mile. Always greet him, ask how his day is, ask how his family is and seem to be really interested in his life. Be the nicest person around. Eventually he will feel like a complete jerk and correct whatever behavior caused you to want to kill him.

You can also kill your boss’s self-esteem. This can take some time depending on your boss’s personality and its easier if your boss is a woman. Start by asking them if they feel alright one day, just say they look a little off. A couple of days later mention the same thing. Do that for about a week. Then move on to their clothes. Say that’s an interesting outfit or your grandparent has the same thing or whatever to make them rethink their wardrobe. Do this about once a week so its not an obvious thing. Then move on to their hair and mentioned something about it about once a week again. You can do these in any order and other stuff as well. Whatever your boss has pride in, just rip it down.

See you can kill your boss without resorting to violence. These are some good ways and plus after reading this I’m sure you and your conniving self can think of others. If you still feel like you need to kill your boss in the other sense, contact me and we can work something out.